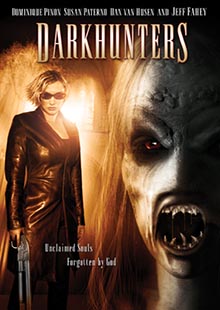 They say the only thing you can depend upon in life is death. Charles Jackson is about to find out that isn't true. Dying is a tricky process and mistakes get made.

A morning apparently like all the others...Charles wakes up. But, nobody seems to see him, not even his own wife...Charles is dead but his spirit still roams on Earth. What is a ghost but a mistake of death, an unclaimed soul forgotten by God? Now his only hope to get to heaven is the mysterious Carol Miller, a Dark Hunter, whose job it is to return those souls to death before others find them, for a soul is a valuable commodity and there are those who do not serve God but a darker master, who would eagerly exploit this. Charles's mission is to save the roaming spirits from the evil forces. A battle between Good and Evil begins...

Darkhunters creates a world of demons and angels that will take you beyond your imagination.

Pray for a quick death. The film swings from graphic violence to comic adventure without losing a beat. The quality of the production is above the standard of the genre, and the special effects and photography is fantastic.