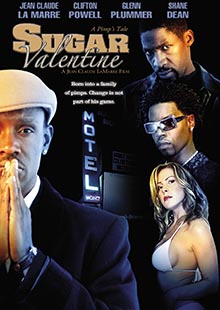 One man must choose between his heart and his profession. Based on the true life story of Sugar Valentine, a man born into a family of Pimps finds that he is increasingly becoming disillusioned with the “game.” And now he must face his biggest challenge of all: Falling in love.With added documentary testimonials from local prostitutes, Sugar Valentine the movie, will become an underground classic.