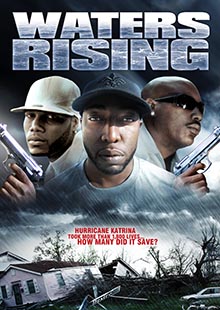 Filmed in the backdrop of the counrty's worst natural disaster, Hurricane Katrina, took more than 1800 lives.... but how many did it save? Two brothers from the Desire Projects in New Orleans just before the storm, not caring about anythng and leading a destructive life, and then just barely surviving Katrina, realizing how precious life really is. After serving time for auto theft committed by Killer, his younger brother, Gangsta vows to go straight for his first love, with the financial benefit of stashed drug money he found in the stolen drug dealer's car. However, after his release, Killer convinces Gangsta to back him, and his crew, up on one last job. The job involves Killers' gang rival JayDee. During the job, Gangsta kills JayDee's cousin, Chicago, and now JayDee wants revenge.

Then Hurricane Katrina hits New Orleans…and a vicious act of nature changes EVERYTHING!

• Waters Rising is a compelling fictional story based on historical events that changed our nation and the lives of many American families.