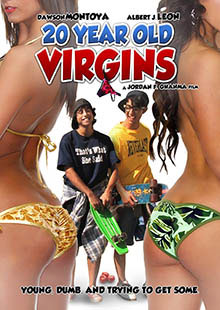 A coming-of-age story about two dim witted 20-year-old roommates, Gene & Eugene, and their quest to lose their virginity. Their new plans hit a few snags when they must deal with their bullying neighbor Rock and Gene's condescending brother Mike, who moves in uninvited after breaking up with his girlfriend. Will their persistence pay off or lead them back to the drawing board? A light-hearted, raunchy comedy movie.