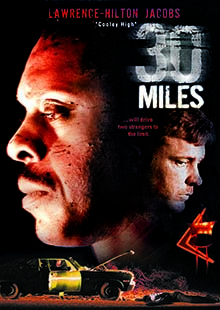 A white man stranded on the side of the road. A black man speeding by in an SUV….An act of kindness with fatal repercussions... A mysterious backpack…And a twist that will leave you staggering. Two strangers, harboring dark secrets and deceitful motives, learn how much can change in just thirty miles.

30 Miles follows two men of different race and background on a pressure-cooker trip. Ernie, a down-on-his-luck drifter, and Anthony (Lawrence-Hilton Jacobs, “Welcome Back, Kotter,”) a successful Hollywood agent, find their fates intertwined after a chance meeting. As the men reveal intimate details of their pasts, guards are let down and emotions are left unchecked. But as day turns to night, and in the desert that buries all secrets, it becomes apparent that this is no random journey down the highway.