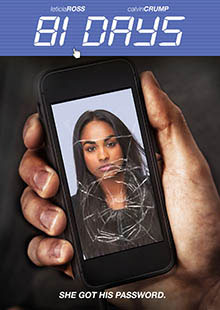 In a widely-used internet world, often times friends, family and even married couples, have major infidelity suspicions because of the suspected cheaters use of it. Tish has had it with her husband Andrew and his Facebook surfing. He lies all the time about his so-called FEMALE FRIENDS that are on Facebook, so, Tish retaliates in the Godliest way one could ever image. 81 DAYS is based on true life social media cheating events that sadly happens to many of us, each and every day.