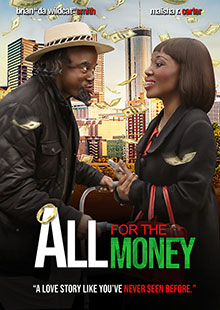 All For The Money

All for the Money...a not so every day love story of when opposites attract. When 67-year-old Eddie Wilson, who lives in his mom's basement, meets the thirty something, hot and classy real estate agent Simone Washington on the "lasttryforyou.com" dating website, it seemed like love at first site. Or at least for him. In a scheme to try to get more internet buzz, the executives at the website give Eddie Wilson one week to convince Simone to marry him. If he succeeds, he wins $500,000 dollars. Of course, they don't think he has what it takes. Well, does he? A comedy you don't want to miss.