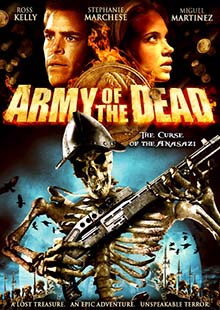 Army of the Dead

In 1590, Coronado dispatched a division of one thousand men to find the legendary city of gold, El Dorado. Those men never returned. While searching Baja peninsula caves as part of an archeological expedition, a university professor and his students unwittingly unleash a long dormant curse. They soon find themselves in a life or death battle with an army of skeletal warriors, the undead remnants of Coronado's conquistadors.