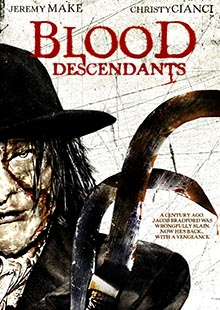 Fulfilling a deadly curse, Jacob Bradford rises from his grave after more than a hundred years and exacts bloody revenge against the descendants of the men who murdered him. After several shocking murders are discovered in this small college town, the locals who know of the curse dismiss it, including the Chief of Police, Brad McCormack. Tensions build as Bruce Fields, father of the cursed family, objects strongly to his son's relationship with Jenny Bradford, Jacob's great, great granddaughter. Ignoring his father's warnings, Matt Fields pursues his love for Jenny. As their intimacy grows, Matt is intrigued by a birthmark on Jenny's shoulder not knowing that it represents a powerful link to the killer who preys upon the town. As the murders become more gruesome, both at the college and across town, Chief McCormack and Janet Moore, a metro forensics officer sent to assist him, scramble to make sense of their evidence; hundred year old weapons, soft porn sites, unexplained fires and a murderer who seems to be everywhere and nowhere at the same time. Only one person has the power to stop the onslaught...but she doesn't even know it!

From the makers of Werewolf: The Devil's Hound and Banshee!!! Synthetic Cinema International, comes BLOOD DESCENDANTS

▪ "'Blood Descendants' is quite an achievement in that it has a tight script, good performances and pretty impressive special effects." -- Michael A. Smith