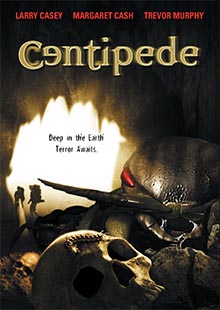 David's childhood buddy, Jake, cajoles him into attending an unconventional bachelor's party: a caving expedition inside the Shankali Caverns. They take off to India with several of their friends and, once there, they enlist a guide to lead them into the underground expanses. The guide regales the group with the mysterious legend of the Shankali Caves. A member of the group enters a cave and it's mortally attacked by a centipede causing an explosion. As a result, the cavern walls collapse, trapping David and his friends along with the deadly centipedes. The remaining crew courageously chops the centipedes in two, but their victory is short-lived, as they find that the halves have remained very much alive, doubling their peril...