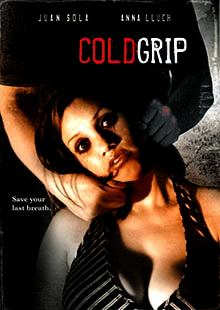 “Cold Grip” is a thriller that tells the tale of lust, rage, murder and death. Robert (Juan Sola) is at a bus terminal and sees a beautiful girl named Greta. After starting up a flirtacious conversation with her, the two decide to go out for a drink and possibly something more. But what Robert doesn't realize is that Greta is hiding a deadly secret of death and she has chosen him as one of her many victims. This one-night stand is really the beginning of Robert's death march. On learning the horror that Greta has inflicted on him, he proceeds to hunt down Greta to seek revenge and end her deadly spree of death with his own cold dead grip.