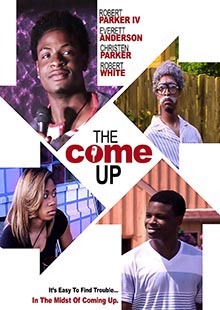 The Come Up is about a young comedian who struggles to try to make it but the streets get him caught up. Hanging with the wrong crowd eventually gets him kicked out his mom's house after drugs and stealing puts her over the edge. With the help of his girl that stays by his side to help him get straight and in order, things start looking up and finally fall into place.