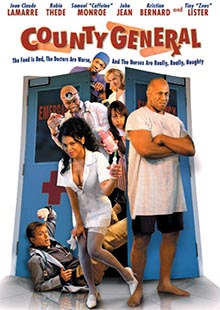 CRAIG, a down-on-his-luck film student, has just failed his first important class exam - a low budget remake of Titanic shot in his bathtub! After receiving an 'F', he is offered some encouraging advice from his girlfriend, Simone who suggests that Craig film the craziness at COUNTY GENERAL hospital where she works. The doctors are quacks, the patients are confused and the nurses bring new meaning to 'bedside manner.' What begins as an innocent student project turns into a hilarious romp through the halls of the wackiest hospital in the hood.