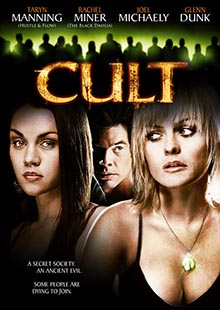 College students, Mindy (Rachel Miner, The Black Dahlia, Penny Dreadful), Cassandra (Taryn Manning, Hustle & Flow, Cold Mountain, 8 Mile) and Alex (Joel Michaely, Wonderland, The Rules of Attraction, Ghost World) are researching an old local cult for a class project. Their investigation uncovers the source of the cult's power came from a magical jade amulet of ancient Chinese origin. The local leader of the sect unsuccessfully attempted to harness its energy with the mass sacrifice of his all-female followers. Now the classmates have uncovered the amulet, and unleashed supernatural powers that may take their lives...and their souls!

• This star driven thriller crosses the line between the dead and the living ...When a college projects takes over your life and your friend start to die, what do you do next?