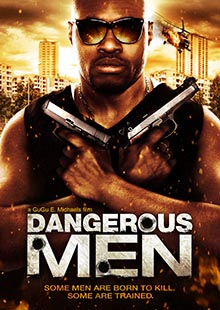 Emmanuel, is an assassin who goes against the order of his contractor X and refuses to carry out a hit placed on Senator Kingston. Emmanuel is forced to take turn a homeless man into the perfect killer. The deadly duo forms an alliance with Kingston and go after X. This leads to the ultimate showdown between the assassin and the head of the organization. Get ready for non-stop action, masterful fight sequences.

• Accomplished filmmaker GuGu E. Michaels has worked as a director and producer on a number of projects. Feature films include, Thugz, Repentance and Dangerous County.
• Actor George Davidson is well known in his home country of Nigeria.
• Winner 2012 - Best African Film at the World music and indie film festival - Washington, DC.
• In 2012 Michaels, racked up over 12 nominations in organizations like World Music & Independent Film festivals with Dangerous Men including Best Action, Best Cinematography, Best screenplay and Best African film.