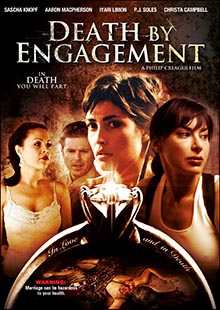 Ditched at the altar, the violent-tempered groom causes his runaway bride's car to crash, then proceeds to bash her head with a tire iron. Now, with the former bride in a coma, her antique engagement ring begins a mysterious and deadly passage from one desperate-to-be married young women to another, with each ending up brutally murdered! Two police detectives, sexy feminist Rikki (Sascha Knopf) and the cocky macho Cade Hamilton are sent to investigate the vicious serial killings. Rikki and Cade find themselves always one step behind the killer, who is bent on reclaiming the heirloom engagement ring.

• “This movie is fun, smart, witty and feels fresh with its take on the slasher genre”. –Pretty-Scary.Net

• “There's plenty of blood and nudity to satisfy those fans and a pretty well written story to satisfy everyone else” --Rick Danford, Sirens of Cinema