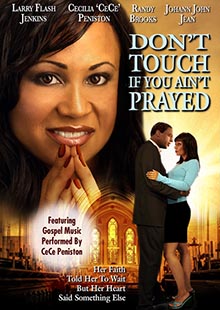 Don't Touch If You Ain't Prayed

After saving herself for marriage, a forty year old Christian woman finally meets her soul mate. But her hopes sour once she finds out this candidate carries extra baggage; a drunk wife and shady dealings with criminal elements. With no other takers on the horizon, she begins to doubt her faith. But good things come to those who wait and a new reformed man returns to her life. Will wedding bells finally ring for our protagonist?