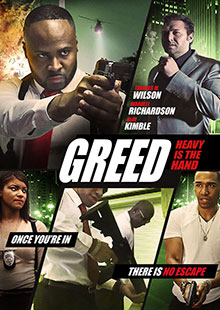 Greed: Heavy Is The Hand

A team of professional hitmen take on a job that gets them caught between political agendas, cops, and a dangerous arms dealer. Alex and Reaper lead a team of highly trained hitmen who have seemingly quiet lives and full time careers. The balance between normal life and what they do on the side begins to take a toll on the team as members of the team start to look at life after and getting out while they still can. After the team eliminates a client, arms dealer Victor Maiden unleashes an unstoppable assassin known as The Ghost to hunt down the team and eliminate them. Pressed back into action, the team will come together once again to stave off the insurmountable threat while keeping their personal lives intact.