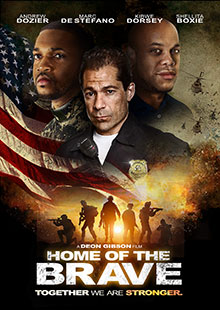 Home Of The Brave

The lives of two young men collide in an unexpected way. A young war veteran returns home eager to rejoin his brother and two close friends at the after-school program they started to help kids in their community. While working to make their dreams of expanding the program and impacting their community a reality they are faced with challenges that could put their program at risk. A young cop makes efforts to connect with the people in the community as one of the good guys. Confident that he's prepared for anything, he jumps right in to protect and serve but it doesn't take long for the young officer to realize that maybe he's not as prepared as he thought. The stories of these two men unfold as we witness their paths cross and their lives changed because of it.