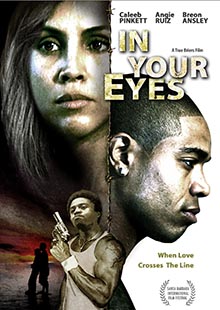 A romantic love story based on "Romeo and Juliet" where two innocent young adults have to cope with the interracial barriers brought on by the people closest to them. Yusef (Caleeb Pickett-sibling to Jada Pinkett-Smith) and CeCe (Angie Ruiz- Bee Season, 40 Days and 40 Nights) are young and in love, trying to do what they can to finally leave their hometown and see what the world has to offer them. They've been friends since childhood from Yusef being a fixture in the Espinoza home as the best friend of Juan, CeCe's brother, and treated like a son by CeCe's father, Sergio (Michael DeLorenzo -Resurrection Blvd.). That's until Sergio finds out Yusef and CeCe are dating and furiously forbids CeCe from seeing Yusef. Opposition intensifies for the lovers when Cedric, the hypocrite cousin of Yusef, comes to stay with him after his release from county jail. His hatred for Hispanics results from his treatment while incarcerated and his turbulent relationship with the Hispanic mother of his newborn child. More complications arise when Cedric falls for the girlfriend of a Hispanic gangster. This torrid affair leads to deadly consequences. IN YOUR EYES is the story of how two people can totally be blinded by the color of love, for they love the person they see ‘in their eyes', and not the color of the person.