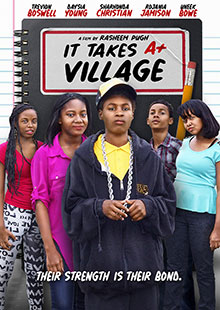 It Takes A Village

When five middle school aged kids are faced with trials of adolescence they are forced to make important decisions. Will their decisions lead them down a path of destruction or success? When their friendship, parents, community, and teachers form a bond, we see the effects the village really has on society as a whole.

Save the Arts films & Flowerchild productions