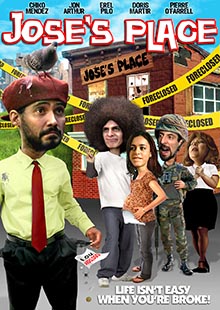 This screwball comedy is about a family-owned furniture store in a Bronx working-class neighborhood and the wacky family that runs it.

Caught with his mistress, Hector is chased down the street into an army recruiting center by his frantically religious wife. He foolishly decides to join the Army rather than face his furious wife. In his desperate attempt to escape responsibility, Hector also abandons his furniture store business.

Jose's uncle Hector gives him and his goofy cousin Raul the right to manage his business while he is away. Jose discovers his uncle's nasty landlord has plans to convert the store into a disco nightclub. Now Jose and Raul have until the end of the month to transform from bumbling clowns into successful businessmen and save their uncle's store from demolition. Will Hector survive the army? If he does, will he still have a wife and business when he returns home? Or, will Jose and Raul learn to disco dance?

• A hilarious Fusion Comedy that will have you laughing all night long!

• Being thrown into a furniture store business is not easy. . . .. but saving it from becoming a Disco is a tricky dance anyway you look at it.