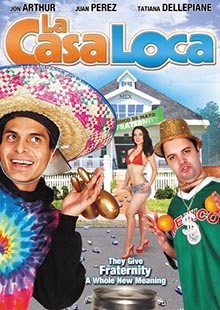 La Casa Loca is a raunchy college frat comedy about a Latino from New York who tries to fit in at a very White college in America's Midwest. Jaime Sanchez (Juan Perez, “El Cantante”) works at a car wash, and lives with his close-knit family in Brooklyn. A miserable failure with the ladies, he takes the advice of his brothers and buddies to try going to college to meet easy female co-eds, and finally end his unlucky streak. He applies to colleges with relaxed admission standards, and much to his amazement is accepted by a small town college in Indiana. Jaime plans to hit the campus party scene, meet hot sorority girls and major in wild college sex. However, Jaime discovers that he is a cultural outcast. Along with his freaky Mexican roommate and other campus misfits, Jaime forms his own fraternity house - ALPHA CINCO DE MAYO DELTA, and challenges the status of KAPPA KAPPA KAPPA (aka KKK) as the Craziest Party House on Campus.

• This hilarious title takes you from the hood to college and what you learn is how to throw the hottest fiesta of the year. Game on. . . ALPHA CINCO DE MAYO DELTA vs. KAPPA KAPPA KAPPA -may the best frat win. . . who's side will you be on?