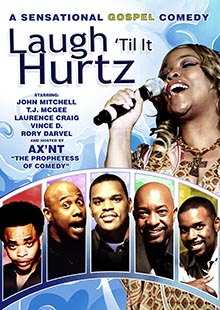 Laugh 'Til It Hurtz

Live In Los Angeles…It's Laugh 'Til It Hurtz, A Sensational Gospel Comedy featuring 5 of the hottest male clean gospel comedians in the USA. Spearheaded by the Prophetess of Comedy herself, AX'NT, featuring Rory Darvel, Laurence Craig, TJ McGee, Vince D and John Mitchell. These comedians have graced the stage with some of the most notable entertainers of our time, such as George Wallace, Cedric the Entertainer, and Sinbad. You've seen them on BET's Comic View, Comedy Central, and Showtime at the Apollo. Laughter is food for the soul, so sit back and enjoy the feast! Surely you will Laugh 'Til It Hurtz.

• A funny, comedy standup that delivers a spiritual message.