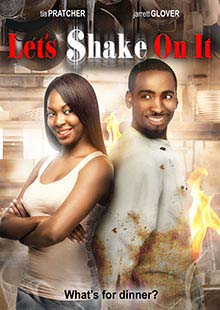 Let's Shake On It

A simple dinner date turns into a fun loving challenge when Brian(Jarrett Glover) insists he can prepare a better meal then what he was served at a resteraunt. His girlfriend Trina(Tia Pratcher) is sure he'll fail especially since he has a reputation for burning food but will reward him if the meal is quality by treating him to an annual music festival. He plans to use his grandmothers secret recipes to win but is faced with an unforeseen obstacle trying to obtain it. The judges are their friends, two of which were a loving couple until a chain of events led them to break up 2 years earlier. They finally reunite the day of the dinner challenge still struggling to fix their estranged relationship but find common ground after judging the competition.