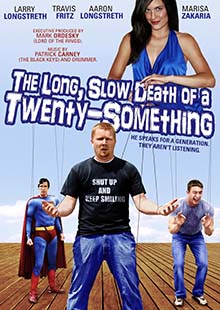 Long Slow Death of a Twenty-Something

Ben Baker is a mediocre person at a mediocre job and spends most of his time drinking, smoking pot and playing video games and Dungeons & Dragons. All is well, until a rather unexpected thing happens to him and everyone he knows....the big "3-0". Follow Ben as he goes through a series of hilarious coming-of-age adventures and awkward mishaps to find his sense of purpose in a world that is quickly passing him by.