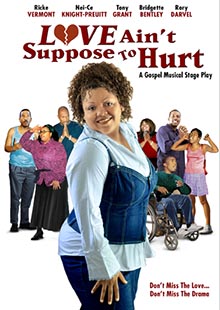 “Love hurts sometimes, but Lawd knows when it's real, it brings more joy than pain!"

Tracie is a single mother caring for her teen-aged son and her widowed father. Using a mix of prayer, humor, love, and advice from her wacky Auntie Shirley, Tracie copes with the problems and frustrations from her needy family and her pitiful love life. Unexpected relief comes in the form of attentive Mark. Can Tracie, whose past searches for love always found the wrong man, sustain her faith that “Love Ain't Suppose To Hurt”?

--From Tyler Perry's New Play "Why Did I Get Married" , TONY GRANT

--From David Payton's "A Good Man is Hard to Find" and David Talbert's "What Goes Around Comes Around", BRIDGETTE BENTLEY

• An uplifting Gospel Musical Play for the entire family.

• A real stage play that is warm, funny and full of real life drama!

• Enjoy this celebration of life, love and laughter that will touch the soul and make your heart sing!