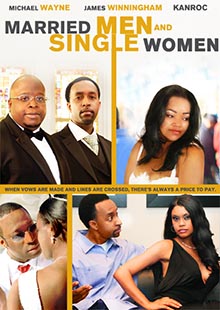 When three married men decide to step out on their marriages they get more than they bargained for. As each settle into lustful and emotional affairs with their mistresses, they soon find that infidelity has unpredictable and devastating consequences. Betrayal, hypocrisy, racism and several other matters surface as MARRIED MEN AND SINGLE WOMEN come together.