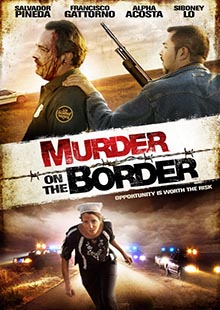 Murder on the Border

Hispanic attorney Eduardo Martinez's life is turned upside down when his family decides to cross the border illegally. At the same time, officer Rick Scalo, is charged with the shooting death of a young latino boy at the US/Mexican border and Eduardo is assigned to defend him. A virtually impossible case to win becomes even more challenging when Scalo, using his border patrol connections, is able to extort Eduardo into winning the case in exchange for his family's safe border passage. Attractive reporter Nivea Rodriguez decides to help Eduardo, but will she be able to reach his family in time, or will Scalo's cronies make them disappear forever?

Murder On the Border is packed with Notable Stars including: