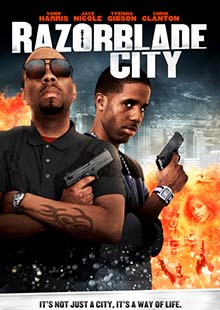 Razorblade City is 'bout to get real ugly, real fast.' When Kingston is framed for the murder of King Leroy's son he becomes the target of the hood's two most ruthless gangsters. All hell breaks loose as he tries to clear his name and find the identity of the person who framed him. Will Kingston make it out of the gun smoke with his life, or will he fall victim to the sharp edge of Razorblade City?