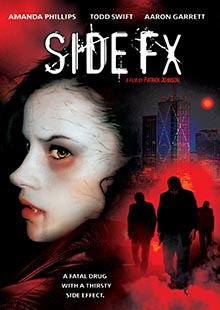 Sex, drugs and rock-and-roll will never be the same after a medieval sex drug makes a comeback on the college party scene. Everyone wants to try this “orgasm” drug but no one considers the side effects.

This drug took its first victims in 1646. The church soon discovered that the blood-drained corpses found around the countryside were due to a powerful elixir that made select victims thirst for blood. While under its influence average men and women turn into animals. The church destroyed much of the drug and vampires, so they thought.

It's now modern day and some medieval viles have been discovered. No one knows this drug makes you thirst for blood and its side effect can kill you.

Winner of The Best Texas Feature at the Deep Ellum Film Festival 2004. Official Selection in the 2004 Chicago Film Festival