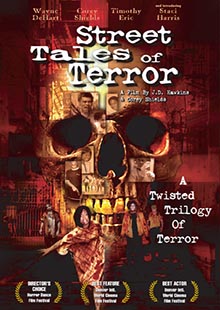 Street Tales of Terror is the Story of three killer thugs: J Dog, Keith and Peaches who terrorize a homeless man who witnessed them commit murder. While pleading for his life, the homeless man tells the trio of three “true” tales of terror and revenge.

“The Reckoning” follows the story of Jessica, a little girl who is left to drown on dry land by her classmates after she is pushed into a swimming pool. On her birthday twenty years later, Jessica comes back to settle the score!

"The Clinic" is the second tale. It's a tale about Jaleesa Daniels, a young lady who is bout to have an abortion. While waiting she has a series of visits that question her decision and her sanity. Are the dreams real or in her head?

“Graduation Night” set in 1975, this tale follows what happens when a college student is raped during a mid-term party. As the final graduation night party ends, a special guest shows up to make the party livelier - DEADLIER!