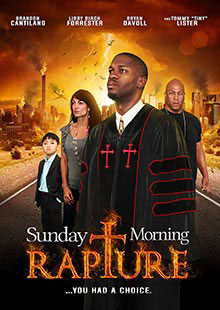 "One day Jesus is coming! You may be at work, you may be at home, you may be awake or you may be asleep. God grant that you will be ready when He makes His personal appearance. What if His appearance occurs on a Sunday Morning?" Award winner Tommy "Tiny" Lister along with sermon excerpts from Bishop William L. Sheals star in this living parable to let the world know about the second coming of Jesus Christ. Pastor Tim is a man struggling with worldly desires despite his standing in the church. Caleb and Victoria Winters are a married couple dealing with the loss and heartbreak of their second miscarriage while trying to hold themselves together for the sake of their adopted son Brandon. Riley and Katrina Kilgore are a wealthy married couple bound together by love, but unequally yoked. And Anne Roundtree believes she has her salvation on track, but she, as with all the others fatefully come to discover that they just weren't ready to face the rapture.