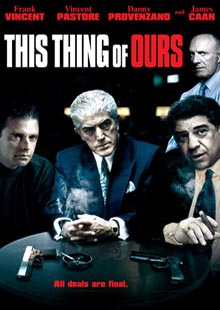 This Thing of Ours

Nicholas Santini (Danny Provenzano) is a young man trying to earn his “button” as a full-fledged member of the governing counsel of a New Jersey-based Cosa Nostra chapter, better know as, The Mob. Trying to impress his notorious elders, including his influential Uncle Danny (Frank Vincent, “The Sopranos”), he schemes up a spectacular robbery that can make millions. As he is no longer content to plunder tractor trailers on New Jersey highways, Nick conspires with a computer genius from the old neighborhood in Brooklyn to plant a modified computer chip on a communications satellite that will allow him to siphon off spare change from several million bank accounts. But his internet bank scam leads to a fateful meeting when Nick is forced to choose between loyalty to his friends and a promotion in the organization. Or, a death verdict for one of their own.

“This Thing of Ours” stars James Caan of “The Godfather” and Frank Vincent, Vincent Pastore of “The Sopranos” and Edward Lynch “The Exorcist.” Co-written and directed by Danny Provenzano.