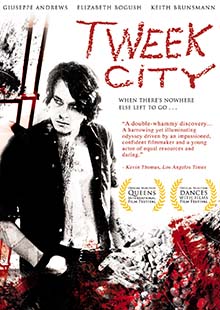 The night keeps going downhill for sleep-deprived Bill, now completely unhinged after a humiliating one-night stand and the death of his best friend from a reckless stage dive accident.

Ultimately, in a hallucinogenic state, he travels down to Los Angeles to crash his high school sweetheart's wedding, and makes a desperate attempt to reconnect with his lost love.

• “Andrews gives body and soul to the role in ways that recall the daring of Al Pacino in "Panic in Needle Park.", -Robert Koehler, Variety

• “. . . a harrowing yet illuminating odyssey driven by an impassioned, confident filmmaker and a young actor of equal resources and daring.”, - Kevin Thomas, Los Angeles Times