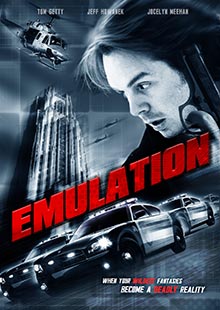 What if you could live life through a movie? This is exactly what the Emulation corp provides for Noah Wilson (Getty). However, the movie is about to become a lot more real than he ever expected. Framed for murder and marked for death, Noah suddenly finds himself the target of a nationwide man hunt. an assassination attempt, and a death-defying showdown on top of a skyscraper. These are only a few events jeopardizing Noah as he fights to prove his innocence. From Tom Getty comes a thriller simmering with paranoia and terror. Made absent a large budget, Emulation follows a young man's pursuit in uncovering the decade's most elaborate and horrifying conspiracy